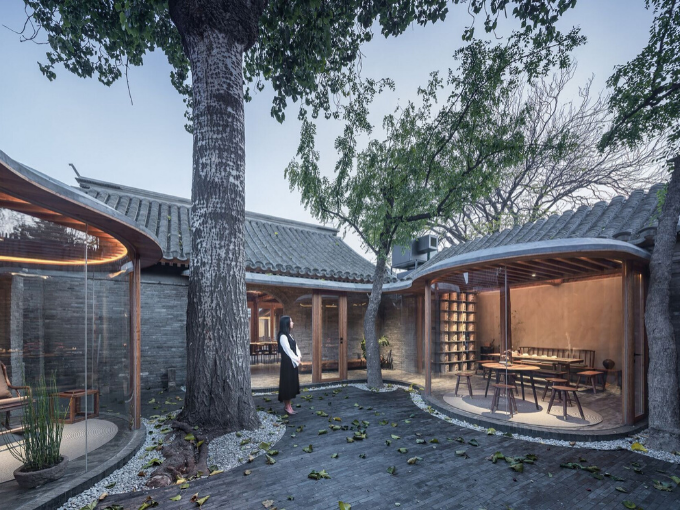 ARCHSTUDIO inserts a veranda that snakes its way to link seven separate pieces of an old huton house together. The veranda functions as circulation while providing a playful walking experience. The Siheyuan house (a typology of traditional Chinese residence) is located in the center of the old quarter of Beijing.

The new veranda, doors and windows are made out of laminated bamboo. The veranda uses a frame structure with ribbed beams and panels in order to make it as light and transparent as possible. Laminated bamboo is a new material that looks like wood and feels like steel.

The 15 by 42 meters plot became old and dilapidated. The wooden beams and arched openings with Republican era style were well preserved, while most of the roofs, walls, doors and windows were in bad shape. ARCHSTUDIO set out to renovate the old and insert the new.

They repaired all surfaces and reinforced the structural elements while preserving the traditional Siheyuan appearance. They brought in a bathroom, kitchen and garage along with HVAC pipes and lines.

The architects maintained the original Siheyuan pine framework and restored damaged parts with the same material. The old building walls were restored by reusing gray bricks from demolished temporary blocks in the courtyard. The outdoor spaces are paved with the same type of brick. Some of the new walls are made from glass bricks in the same size.

The middle courtyard is designated as an activity space. The area holds a living room, a tea room and a dining room with a kitchen. The designers respected the symmetrical layout of the original house. The dining room has a folding door that can open up to the courtyard.

Through a restored arch you enter the back courtyard with the dwelling space. Two bedrooms with attached bathrooms, a tea room and a study. Here the veranda has an undulating plane that curves around three old courtyard trees.

Stone slices, crocks and a millstone that were unexpectedly found during construction were reused as stairs, flowerpots and adornments. The waste that came from the wooden beam restoration was used to make chairs.